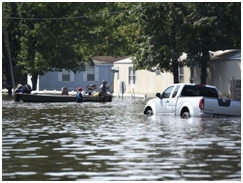 Power Cut to Flooded Homes in West Huston under Mandatory Evacuation: A mandatory evacuation of homes has been ordered for 300 residents which were flooded in West Huston. Earlier a voluntary evacuation was requested. 115 residents did it voluntarily, but 300 are still to be evacuated.

It is dangerous to stay in such homes and as a measure of safety, residents have been ordered to evacuate. Read news of a Power cut in flooded west Houston under an evacuation order.

In a still-flooded area of West Houston, Electric company workers visited door-to-door on Sunday and issued a mandatory evacuation order with a warning that the power supply would be cut off. Electricity to the houses which were not flooded in the area won’t be cut off.

The evacuation order has been issued for flooded homes in the area south of I-10, east of reservoirs, north of Briar Forest, and west of Gesner. The electricity cut-off in the zone is from Sunday at 7 a.m. Cut-off will apply to only homes that were flooded.

Addicks and Barker reservoirs were filled to capacity due to rain from Harvey which flooded the area. Water will still be released and may leave homes in standing water for two weeks. Mayor Sylvester Turner addressed NBC’s Meet the Press and said that he had issued a mandatory evacuation order to the houses which were in the water as it was dangerous to live in such houses. It is to prevent any further harm.

Water services in Texas have been partially restored. Residents are advised to drink boiled water. National guards are distributing water bottles from distribution centers. People are standing in a long queue to get the cases of water.

Rescue operations and assistance are going on war footings in the affected areas. Fire in the chemical plants has been put off and efforts have been made to avoid such fires further. Residents are returning home.

But still there remains a lot to be done to restore life back on the track. In Port Arthur, it will take about three weeks for schools to begin. The death toll due to the storm has been 44. Financial loss is estimated at over $100 billion.

President Trump visited Texas Saturday and talked to evacuees in the shelter homes. Turner asked him for quick assistance and financial help for the restoration of victims which include debris removal, repairing of homes and other buildings, and transitional housing. Read more articles on rozyjos.